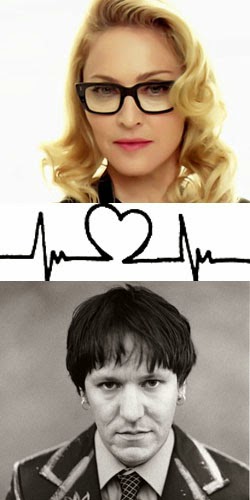 K. So....I bet you didn't see this one coming. First, LOOK! I found a photo of Madonna being a Hipster! Next, she performed my favorite Elliott Smith song, Between The Bars, the other night as a protest to the prison system and for her new project called the SecretProjectRevolution. Well, the song is NOT about prison.... at all..... but about a night of binge drinking from bar to bar with a girl Elliott had quite the emotional relationship with.... Leave it to Madonna to make a dramatic play on words as she is dragged out in shackles by two fake cops and sings it on the floor. It is decent though. Not my favorite cover of the song ( oh it's been done before), but if it gets people who listen to Madonna to listen to Elliott Smith, I'm on the band wagon.