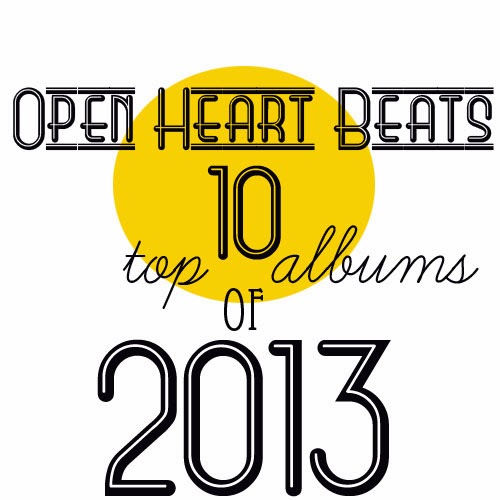 OK. I would like to hear from other music bloggers about how they do their list, and if they like it. To be honest, it causes me anxiety. SO much GOOD music... how do you break it down to just 10?! SIGH. I felt like I was killing my darlings, even though its not like THEY ( yes, I'm talking about albums as if they are living things) will actually know or feel hurt, but it was important to me to take my time and make sure I weighted all categories: How much of the album did I listen to consistently? How many of the singles, and how much of the album as a whole do I really like? Which songs connect to a significant moment or period of my year? Which made a huge connection to me the first time I heard and which ones seeped into my bloodstream slowly until I had it on repeat? Well this is getting boring, but these were the few things I considered. Let's count it down.

This is one of your bands that when you see them your heart swells. Great for road trips, dinner parties, and a summer day, this band has heart. And their music will lift your heart.
Fave Tracks: Canopy, Have to Pretend, No Tomorrows

Well, its no secret that I am a long time Tegan and Sara fan. I will admit that I haven't always loved their entire albums. I found myself more obsessed with a single or two and then it kept getting better and better as they grew as musicians. Then came The Con, yes there were some amazing tracks, Saint Hood even more so. But this new one. Holy cow. I'm totally on board. They definitely channeled 1980's Cyndi Lauper for this album and kinda killed it. If you went through a break up. You'll be like, "HOW DID THEY KNOW I FELT LIKE THIS?!" If you didn't you'll be like, "Daaaahhhhh this is catchy and adorable and totally reminds me of my ex." Either way, it's a win.
Fave Tracks: Closer, How Come You Don't Want Me, Now I'm All Messed up, I Was A Fool.

This LA local duo just really loves what they do. Drummer/ vocalist Darren Weiss ( He used to be in Girls) has a voice that will remind you of The National but there's a bit more lust and maybe The Boss in there. Bassist/songwriter Daniel Presant supports that set of vocal chords with songs that are full of crave, lust, and yearning for love and coping with loneliness which is why this album, Tender Madness, is perfectly named. Watch for these guys cause they've toured with Ra Ra Riot and Grouplove, I think they will be head lining very soon!
Fave Tacks: If You're My Girl Then I'm Your Man, I am Lion King, Put Me To Work,Young Rut...god I love the whole thing. Honest.

I don't think this is a surprise to anyone that it made the list. I've been like a vulture, lurking over them via internet and posting everything they do. They went the single route and slowly tortured everyone for almost the whole year, releasing a little nugget at a time. Well the full album was not a fail since it was filled with single hits! I know they are the little indie darlings right now but I still find them down to earth and their songs relatable and catchy as hell. I can't even tell you how many times I've sung Don't Save Me at the top of me lungs in my car this past year. It happened.
Fave Tracks: Don't Save Me, Falling, Forever, My Song 5, Go Slow

#6 Vampire Weekend-Modern Vampires of the City

Straight up, this album kinda rocked my summer. I love how many risks and experimental quirks they tried and they totally paid off. I have always had a big soft spot for them because even though their look is that of the preppy rich hipsters in Williamsburg that had everything handed to them, their sound reminds me of the Talking Heads, which play my favorite song of all time. I was lucky enough to see them twice this year and the first time was when their album was just about to come out and my first reaction was: Holy shit they sound polished! Even with a whole new album it was clear this was not their first rodeo and were prepared for the crazy touring summer/fall that was to follow. By the time I saw them again, still sounded just as professional but this time everyone in the Hollywood Bowl knew every word. I just think a happy album like this can't have any negative memories attached to it. Good for them for continually making good pop indie rock and exploring their abilities every time.
Fave Tracks: Everlasting Arms, Unbelievers, Diane Young

She's from Portland. The music isn't complex. She has a good voice but doesn't even try to hit the notes and make angels sing, but I think that's what I love about her. It feels like her tone asks you to listen to the lyrics carefully (which I love) and without even noticing it, you reach the end of the whole album because its great. She's just puts me at ease with that little bit of angry edge that makes her perfect after a long or emotional day. Like she obviously has some things to work out and yeah, don't we all. I feel like if she existed a few years ago, she would have made it onto the iconic Juno Soundtrack and be making tons of money right now. But her time is about to arrive. She destroys live. Go see her.
Fave Tracks: Peace and Quiet, Dixie Cup and Jars, Blue Part II, Lips and Limbs

Oh my little Kiwi, how I adore thee. Unless you've been under a rock, this girl has hit your radar by now. When my friend first sent me her Love Club EP back in February, I thought it was a little strange but I found myself going back to the song Royals over and over and then before I knew it I was a Lorde Junkie. I think her video for Tennis Court was what really did me in. This girl has just somehow surpassed all the stupid teenage crap that would make me hyperventilate to have a teenager right now and can just put it in a way that kinda makes my jaw drop. Being a poem-writing-literary-mag nerd, I would have died of envy if she came out when I was in high school. She's damn intelligent, poised, and doesn't seem to have any interest in giving in to the hoopla or even writing a pop love song, which I don't think we can say about many teenage musicians. The way she sees the world is a breath of fresh air for our younger generation to see. Every song on this album it made me nostalgic for when you about to turn 18 and so afraid to get old but so excited to move on past this stagnate stage. I can't wait to see what she does in a few years, how she turns out. I had the honor and (somehow got a ticket) miracle to see her perform her 2nd show ever in the US at the tiny Venue of the the Echoplex. Fair to say that won't be happening again, but she was stunning. My one hope is she doesn't move to LA, that could ruin everything.
Fave Tracks: Tennis Courts, Ribs, 400 Lux, Team, A World Alone ( if I says Royals that's too obvious, right?)

#3 The National- Trouble Will Find Me

K. First off I have to say that I had one of my worst cases of food poisoning the day that I had tickets to see The National perform with Daughter at the Hollywood forever cemetery. I had no choice but to sell them even though I tried to rationalize having a cab take me there and crawl in with a blanket and just lie there during the whole show.....it didn't seem like the best choice. I will never get over it and makes my heart rage when I think about my bad luck but it still was definitely one of my top albums of the year. Hands down. How can this band can be so sad and serious and still so uplifting and nostalgic at the same time?
Fave Tracks: Don't Swallow the Cap, Sea of Love, This is the Last Time, I Need My Girl

Shocker. Justin Vernon did another side project album with these guys and I ranked it as one of top albums of the year. Oh you're not shocked? Is it because he could record a fart and I'd love it? Well now, that is shocking. Ok all joking aside, this album is gorgeous. And yes, because Justin's vocals are on this one more than their previous Volcano Choir album, it sounds more like Bon Iver......but his voice is just that distinct. So if he sings anything falsetto from here on out, people are going to think it sounds like Bon Iver. Yet the music and emotions and the ache in your chest from this album is very distinctly different than Bon Iver. Somehow it's one of those albums where no matter what you are feeling: sad, happy, lonely, mad, broken, inspired, rain, snow, sun........it fits. I love that. And did you see the music videos?! GAH, breath taking and simple! Since Justin announced himself that he doesn't know if he will EVER do another Bon Iver album ( GAHHHHH SAY IT AIN'T SO *faints on one of those Victorian fainting couches*!!!) I am clinging to this for dear life, and with good reason.
Fave Tracks: Comrade, Bye Gone, Alaskans, Tiderays...but just listen to the whole thing through.....you won't regret it and find yourself emotionally in tune to everything around you.

#1 CHVRCHES-The Bones of What You Believe

The reasons this is my number one albums of the year:
1. I want to be lead singer, Lauren Mayberry. She has a law degree and a masters in journalism which led her to reviewing music for years in Glasgow Scotland BEFORE she joined this band and made this precious diamond of an album. Major Girl Crush going on over here.
2. I've imagined myself getting to be her while she's on tour dancing and singing my ass off to this awesome album to a delightful dancing crowd and I'd get to have a cute Scottish accent. OK....this is getting weird, moving on.
3. The right amount of emotion and the right amount of danceability on every song that I haven't heard for a few years since Robyn.
4. I've danced to this in my car, my shower, at my desk, in my bedroom.
5. They covered, Haim, Whitney Houston and East 17
6. Everything about this album feels honest. Every emotion and each hook catchier than the last
7. The whole bands love for 80's movie soundtracks can be heard on here and makes my heart flutter.
Fave Tracks: Lungs,  Gun,The Mother We Share, Lies, Recover, Night Sky......Which brings me to
8. I basically just listed the whole album. You should too.


I will list the runner up albums in a few days....let's let these have their glory and give you time to take a listen. What were yours? Please let me know in the comments! I would love to hear!