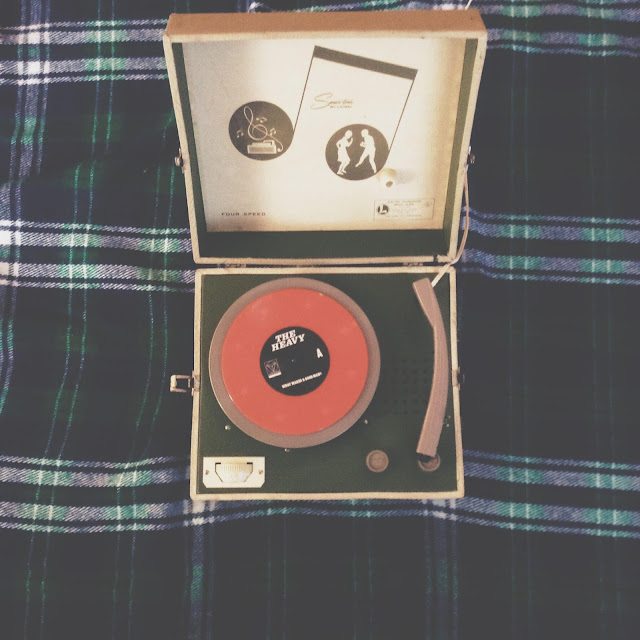 Hey ya'll.....instead of trying to make up for lost time, I'm just gong to pretend it was never lost and write as if I never stopped.  K? K.

But first, can we just take a second and bow to the Thrift Store Gods for sending me this perfect condition fully functional record player from 1963 from Good will last week?! GAH!

Finally have some time on my hands where I can drive around or sit around at home and listen to full albums again and my heart just fills fuller! Here are a few FULL albums that are worth a gander:

Well well well.....look who is Killin' it? Get it?! Har har har.  Killers frontman seems to have been hanging out with Bruce Springsteen ( Listen to Dreams Come True, Between Me and You) , Peter Gabriel (Listen to Can't Deny My Love,Diggin' Up The Heart, Never Get You Right) and Talking Heads ( Still Want You) a lot, or at least you would think so by listening to his latest album. With his track record he has proven his hand is on the pulse of playing with nostalgic 80's heartstrings and yet new pop ballads that well leave their mark on this generation.

Wanna have a dance party? BBQ pool party? Pre-game saturday night getting ready party? These are your guys. I still remember dancing to them in a tent at Coachella 2012 in 112 degree weather  and not caring if I passed out. The struggle was real. That's what they do to me. Just get me giddy and pumped! Their last album, Mixed Emotions, made my top 10 list  a few years ago and since its half way through the year, I think its a good possibility this one will do the same thing. This album screams summer vibes. Just dive in already.

Changing up the vibe a bit. Not only does this Grungy 90's alt rock band have the most bad ass lady lead singer (Ellie Rosewell) since Garbage and Hole, they will make you want to go find your plaid everything, doc martens and pierce your eyebrow/bellybutton/tongue all over again. I also hear influences of the Smashing Pumpkins and The Breeders and god damn, I'm just digging it so hard. COME ON FULL LP! I WANT IT!
Faves in order: Moaning Lisa Smile/ Bros/ Blush/She/ Giant Peach